END_OF_DOCUMENT_TOKEN_TO_BE_REPLACED

Karlheinz Meier and Laurie Goodman to speak at the DI4R conference 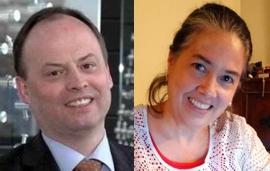 We are thrilled to announce the keynote speakers of the DI4R conference.

Title: “The brain, the universe and the need for integrated infrastructures”

Karlheinz Meier holds a diploma and a PhD in Physics from Hamburg University. During the last 30 years, he has contributed to several major particle physics experiments at DESY and CERN, specifically: JADE at PETRA, UA2 at the CERN Proton-Antiproton Collider, H1 at the HERA Electron-Proton Collider and ATLAS at the LHC. He also contributed to European initiatives in detector research, notably the RD1 and RD27 collaborations at CERN.

Meier is the founding director of the Kirchhoff Institut für Physik and of the Laboratory for Microelectronics  at Heidelberg. Since 2011, he has been director for neuromorphic computing of the EU HBP FET Flagship Project.

Based on his experience of designing and running custom electronic data filters ('triggers') for particle detectors and the establishment of the Heidelberg ASIC Laboratory in 1994, he initiated and developed a new line of research in Heidelberg. An overview of his publications from this work can be found in INSPIRE.

Title: “Data Citation: Credit Where Credit is Due”

Laurie Goodman is the Editor-in-Chief of the international open-access open-data journal GigaScience (co-published by BGI and BioMed Central), which has a novel publication platform with article publication linked to a database that hosts all affiliated data.

Nature Genetics , then moved to Cold Spring Harbor Laboratory Press in 1997 to serve as the Executive Editor of Genome Research and Managing Editor of Learning & Memory.

In 2006, she started her own company, Goodman Writing & Editing, which provides manuscript editing services and manuscript writing seminars.